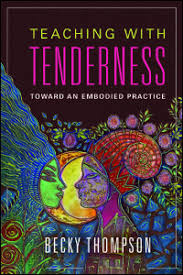 I would never have heard of this book unless Laura Webber recommended it to me. She is working with us at the Alliance for Peacebuilding this summer on our recently renamed neuroscience project, Peace Rewire. Laura is both a peacebuilding graduate student and an experienced yoga instructor who is trying to combine the two in her academic work. I figured I had a lot to learn from her. I was writing. My education started with this book.

Thompson, too, combines yoga and academics in her work as a sociologist who is interested in gender and race and most of the other issues that eddy around those fields. Even though those are issues I’m interested in, I didn’t expect that this book would lead me to rethink everything I’ve done in the classroom for almost half a century. That’s just what Becky Thompson did with Teaching with Tenderness. What she means by that is clear on the second page of the book (at least in my Kindle edition:

By tenderness I mean an embodied way of being that allows us to listen deply to each other, to consider perspectives that we might have thought way outside our own worldviews, to practice a patience and attentiveness that allow people to do their best work, to go beyond the given, the expected, the status quo. Tenderness makes room for emotion; offers a witness for experiences people have buried or left unspoken; welcomes silence breath, and movement; and sees justice as key to our survival.

I had already been (re)thinking what happens in classrooms now that I’ve been sitting in on and vaguely helping my friend Doug Irvin-Erickson’s classes for the last year and a half and spending more time at George Mason’s School of Conflict Analysis and Resolution. Put simply, I’d already been reconsidering what happens in classrooms before I read this book. 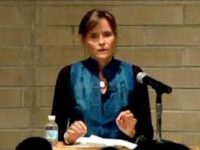 Teaching with Tenderness so swept me off my feet that I could not summarize her findings without a) doing injustice to her ideas or b) writing at least a ten page review.

In the end, I’m probably not going to go as far as Thompson does. I’m unlikely to bring yoga or poetry into a class or into the AfP office. I’ll probably always focus more on content delivery in my public talks than she does in the classroom.

Still, as someone who reads a lot, this is the first book I’ve read in ages that made me go back to the basics of who I am and how I organize my professional life.