The Art of Gathering 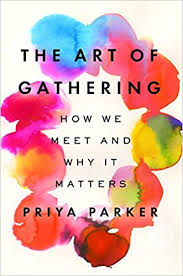 I’m a member of the Next Big Idea Club that sends me (and two high school students) two new thought provoking books every three months. Now, they have also started publicizing the runners up that didn’t quite make the grade. This time, one of them was Priya Parker’s The Art of Gathering. When I saw that she began her career with Sustained Dialogue, which is one of my favorite Alliance for Peacebuilding member organizations, I immediately got a copy.

You see, I hate meetings. I even hate the meetings I organize. At the same time, I love gatherings that produce the kinds of dialogues that Daniel Yankelovich used to see where “so charged that they left neither party unchanged.” Most of those gatherings took place at dinner tables or on walks or at campfires. But, occasionally at meetings, too.

So, I turned on my Kindle expecting advice on how to make meetings more like gatherings. I got that and more.

The lessons I took away also left me somewhat embarrassed because as a teacher and networker, I’d done a lot of the things she suggests, but not in a consistent or coherent way.

Indeed, the most important point of the book is to think through and plan for what you want your gathering to accomplish. That’s all the more important when the gathering is a routine one like a class or a weekly staff meeting. Without going into the details of the book (because it is such a delight to read), here are the key lessons I learned:

As a peacebuilder, I keep finding myself learning more from books that take me to new territory like this one does. At the same time, because Parker started out in conflict resolution, the connections to the work I do are more obvious than they were in, say, books on improv.

In short, a great and thought provoking book that will change your next gathering.