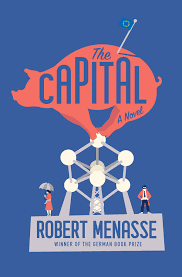 I don’t read much quality fiction any more. In fact, this is the first novel I’ve recommended in my newsletter in years.

Like the others I recommend, The Capital is  political satire. About the European Union which is rarely a subject that lends itself to political humor.

Even more than Donald Trump’s Washington, it can be seen as a swamp. As a mass of red tape. Of self-conscious and egotistical civil servants.

The Capital, of course, is set in Brussels, the perpetually rainy city that is home to most of the EU. Most of the EU’s features scholars worry about are in the book, including its Eurobarometre public opinion polls, which helped launch the career of Ronald Inglehart and dozens of other political scientists.

Although it is hard to make the Eurobaromtre and the rest of the EU seem funny, Menasse succeeds at doing so.

If, like me, you need some occasional diversions from the real world absurdity of political life, you can do a lot worse than The Capital.