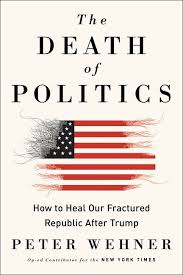 The Death of Politics

I met Pete Wehner at a conference on the future of American democracy at Oberlin college about a year after the 2016 election. We liked each other then, and I therefore eagerly awaited this book. I put off reading it until my wife and I took a working vacation to Italy and I knew i had two long plane flights. I also knew that Pete was a good enough writer to keep me awake!

In fact, the both kept me awake and gave me nightmares, which is why it is worth reading.

I had known of him before he came to Oberlin because of his time in the Reagan and Bush administrations and admired his courage for coming to Oberlin where Republicans are, at best, an endangered species.

At the same time, I knew that Wehner was one of the first and most prominent never Trump Republicans.

The Death of Politics takes off where his talk that night ended.

His is by no means the first critique of the Trump presidency.

And, you will have heard much of what he has to say before.

However, he goes a lot farther than most in two key ways that make this book worth reading.

First, he puts the Trump presidency in context. As he sees it, the problem goes beyond Trump and started long before he announced his candidacy. One of the reasons I put off reading it until the flight to Italy was that I knew I was heading to a country that suffers some of the same political problems for some of the same social, economic, and cultural reasons. I also knew that I would be asked to talk about American politics and I wanted to be prepared with conservative critiques of the Trump presidency and more.

Second, like the good peacebuilder and Christian that he is, Wehner does not lay all of the blame on Trump and his supporters. He asks why Americans turned to Trump in such numbers–and, by implications why Italians support politicians like  Matteo Salvini or the French Marine Le Pen. In particular, he asks why engaged Christians like himself tolerate leaders like Trump. By implication, he asks why we all do so.

When I met Wehner almost two years ago, he said that there were dozens of prominent Republicans willing to break with Trump at any time. I wished he was right then. I hope he is right today.