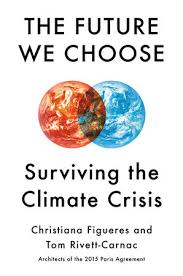 The Future We Choose

There has been a flurry of new books on climate change now that we passed the fiftieth anniversary of the first Earth Day in the United States and seen the Paris Agreement on Climate Change face new threats, most notably from my own country.

This book by two if the agreement’s leading architects, Christiana Figueres and Tom Rivett-Carnac gives us some reason to both feel hopeful and find our own individuals ways of contributing to a more positive future.

The book doesn’t start that way. The first two chapters, in particular, focus on the problems we face. The world we are creating if we don’t change is one that will face permanent danger that my grandchildren will have to live through.

As is the case with most books on climate change, the authors point out that the changes required of us will be gargantuan. However, unlike most other books, they suggest ways in which each of us can change and do our own part in getting there, ranging from changing our own consumption habits to how we deal with other issues, including equality.

But, most of all, they argue that it all starts with a shift in mind set or personal paradigm which applies not just to climate change but to every other problem we face, too.

Their proposals are wide ranging and cover most aspects of our lives. I’ll leave it to you to read the book and figure out which ones work best for you personally.