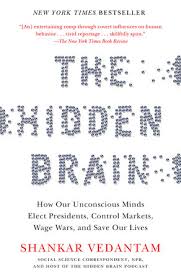 I finally got around to reading Shankar Vedantam’s The Hidden Brain. I’m not sure why I waited almost a decade since I’ve been a fan since he first started reporting for NPR. Perhaps because he has anew book coming out in six weeks?

At any rate, The Hidden  Brain was one of the first trade books that tried to explore how our unconscious minds shape so much of what we do. Many more were published in the 2010s, but Vedantam’s book has stood the test of time in part because it is so comprehensive and wittily written–just like his radio program and podcast.

Like the scientists whose work he has devoured, Vedantam is unable to determine how much of our unconscious mind is hard wired and how much of it is a function of experiences we assimilate early in life, such as the way we view race.

Indeed, viewed from the perspective of 2021, that may be his most important contribution, one he has continued to make in the years since The Hidden Brain was first published. In fact, he was among the first authors to bring ideas like the following from hardcore scientific research into mainstream discussions of race and prejudice:

Pervasive bias can occur without anyone–parents, teachers, or the children themselves–wanting it to happen (75).

More generally, he was one of the first journalists to bring the Implicit Bias Test to the public’s attention. Largely because of the images and impressions we are given at an early age, most Americans ends up with biases about race, gender, and more that guide how they act, often without being aware that they have such prejudices. Indeed, as we have seen in the news coverage in recent weeks and months, people with prejudices in their hidden brains will often deny that they are prejudiced at all.

This is a wonderful book that peacebuilders and others should read if, like me, they want to help bring about a paradigm shift in thew ways people think about and act toward each other.

It is also a wonderful and witty read that reflects Mr. Vedantam’s uncanny ability to find engaging examples and tell capitvatingstories.