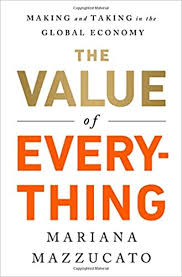 The Value of Everything

Mariana Mazzucato is one of the world’s leading economists who is best known for her trenchant criticisms of the neoliberal orthodoxy and its belief that free markets are the key to economic growth. In her earlier work, she has made the case that many of the seeming successes of market capitalism, including the internet and other technological innovations, were not the result of unbridled capitalism alone. All were largely made possible by substantial public sector investment which has led her to warn us not to ignore the ways public-private partnerships can contribute to innovation and economic growth.

She goes even farther in The Value of Everything and anticipates many of the issues that have burst onto the scene since the start of the COVID-19 pandemic and everything else that has roiled our lives this year. Most notably, she explores how the growth of the financial sector and shareholder capitalism have contributed to slow and unproductive growth as well as the widening of the gap between rich and poor in the United States and beyond. Thus, consider these words from her first paragraph.

Between 1975 and 2017, productivity grew by about 60 per cent. Yet from 1979 onwards, real hourly wages for the great majority of American works have stagnated or even fallen.

And she takes off from there often in more economic detail than most peacebuilder readers would need. Nonetheless, the book is worth reading because it explores the differences between stakeholder and shareholder capitalism. The two-letter difference between the two words says a lot. Instead of benefiting the owner/investor, stakeholder capitalism is designed to benefit everyone over the long haul, including workers, consumers, competitors, the environment, and the entire society as well as the men, women, and institutions that are wealthy enough to own part of the company.

As with everything she writes, this book is filled with quantitative evidence (which can be hard to follow) and delightful stories of companies and public sector institutions that have made a difference for the better..

A must read for anyone interested in combining peacebuilding with economic justice.