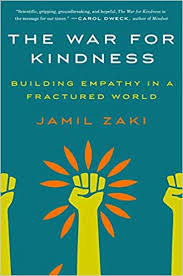 The War for Kindness

This is a rare books whose subtitle–building empathy in a fractured world–tells us more than its main one–the war for kindness.

Yes, Jamil Zaki’s book does make the case for kindness through empathy. But, the case he and his research team make has more to do with the evidence underlying three dimensions of empathy than it does about any struggle to build support for it.

As most readers will no doubt know, empathy has been a buzzword in peacebuilding circles. Zaki, however, takes our understanding of the term farther in the ways suggested by the second two bullets. First, it is not just understanding how and why people think the way they do, but understanding the emotional underpinnings of the way they think. Second, far more than most empathy researchers, Zaki asks us to consider how and why empathy leads to compassion and other forms of concerns for others.

It is also remarkable because Zaki suggests that empathy is not simply an innate trait that we are born with–or not, as the case may be. Rather, it can be nurtured, which is why the concept is so important for peacebuilders and others who are looking to close the divides in the United States and beyond.  That should not be surprising, since Zaki runs a neuroscience lab in which the notion of how “plastic” our minds are tends to be on intellectual center stages.

As such, he draws on a wide body of research–much of which was not done in his lab–that underscores how the right forms of social contact, for example, can allow us to overcome hatred, including among members of extremist groups at all points along the political spectrum.

In perhaps the most surprising set of findings he reviews, Zaki suggests that the greatest value of empathy with others is the fact that the we tend to ask more questions about ourselves and our own beliefs/behaviors the more empathetic we are toward others.

This a remarkable book, one of a number of remarkable books to have been written in recent years by members of Stanford’s psychology department. Everyone interested in peaceful social change needs to read it.