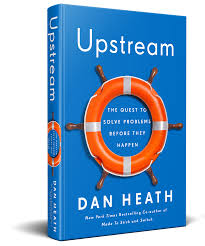 I’ve been a fan of Dan and his brother Chip Heath since I first discovered their books about ten years ago. Since then, I’ve found their insights into the psychology of business have tremendous relevance for my work as a peacebuilder. That’s also true of Dan’s first book on his own, Upstream, in which he thanks his brother for talking him out of going to law school!

I like their work, too, because both of them are systems thinkers which helps you see why the word upstream here has little or nothing to do with rivers but with tackling problems as close to their source as possible. That means intervening early–or at least as early as possible. It also means addressing a problem’s root causes (a turn of phrase that doesn’t mesh with rivers at all) as well as their interconnections. Dealing with them inherently means that:

Upstream efforts are broader, slower, and hazier–but when they work, they really  work. They can accomplish massive and long-lasting good (9)

In going upstream, we focus, too, on prevention. That, in turn, means trying to figure out where our blind spots lie, confronting our stereotypes and other biases, taking as much ownership of the problem as possible, avoiding tunnel vision, expanding our options, building diverse teams, and more.

As is the case in the books he has written with his brother, Dan is a master story teller and a master chooser of stories to tell. You’ll not only see his key points but they’ll stick in part because he talks about examples as different as a campaign to end teen drinking in Iceland and homeless veterans in Illinois.

I’m sure that if you read Upstream and it is. your first exposure to their work, you’ll become a Heath brothers fan, too.