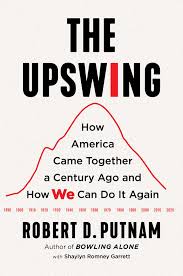 I’ve been a fan of Bob Putnam’s ever since I took a graduate school seminar from him back in the Dark Ages. I’ve kept up with him and his work ever since as we have both shifted our attention more to cultural change in the United States. I first encountered Shaylyn Romney Garrett when she helped write one of Putnam’s earlier books, and her name keeps cropping up in initiatives for constructive change in the US, too.

The Upswing  should be of interest to anyone who wants to produce constructive change in the US. The cover image sums up Putnam and Garrett found. There are have been periods in the past when our cultural norms supported sweeping change. We could be entering one of those periods now when and, especially if, our individualistic thinking at least partially gives way to thinking more in terms of “we” and what we can accomplish together. Veteran Putnam readers will not be disappointed by his use of data and by the new tools he uses. They will also not be disappointed by the way he revisits the core themes in American social, economic, and political history or the attention he gives to questions of race and gender.

When I first saw Bob present the data underlying this book, he did not include much on race and gender. Adding them–and dealing with the fact that they don’t exactly fit the u-shaped curve you see on the cover and is at the heart of the book–makes the book even better. As they point out, we will not be able to repeat the politics of what they call the great convergence of a century ago. We will have to focus on issues that weren’t fully on the agenda then, including race and gender, but also climate, generational change, and more.

Bob ends his part of the acknowledgements by saying that he had promised his wife that Our Kids would be his final book. I’m glad he went back on his word to Rosemary. Somehow, I suspect that she is, too.