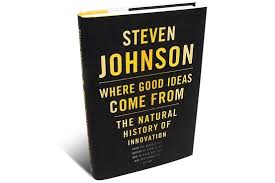 Where Good Ideas Come From

I normally  only review books that are hot off the press that I’ve read because they have something to do with an issue that I’m currently working on.

But, I’m going to break my own rule here.

This week, I found myself going back to Stephen Johnson’s Where Good Ideas Come From for a series of blog posts and book chapter I’m writing on innovation. I had forgotten how much the book had affected me when I read it almost a decade ago. It was then–and still is–the best book on where game changing innovations come from.

And, since he is neither a peacebuilder or a political scientist, I realized that not many of the people I work with even know he exists.

When I took my first research methods as a college sophomore in 1966, Ken Sherrill had us read Thomas Kuhn’s Structure of Scientific Revolutions which turned me into a paradigm shift guy.

I fear, however, that I made a common mistake people make when they read this book for the first time–especially when you are still in your teens.

Johnson takes Kuhn’s ideas and explores the difficulty of actually pulling off a major innovation. As is always the case with his books, he tells  his story brilliantly, choosing examples that still felt fresh when I went back and reread the book for the fourth time this week. Innovations do not appear out of thin air. The ones that stick have to be based on what the evolutionary scholar, Stuart Kauffman calls the adjacent possible. It has to be based on small steps that are plausible given what is known at a given moment in time. It requires experimentation and failure and, most notably, learning from our “bricolage” or tinkering.

In closing, this is one of the best books I’ve ever read.