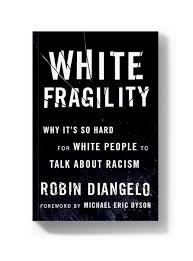 Like many progressives who came of age in the 1960s, I’m struggling to figure out why we haven’t made more progress on race relations in my adult lifetime. Robin DiAngelo’s White Fragility helps us do so by showing why whites have a hard time discussing race, seeing their role in perpetuating inequality, and how we could break ourselves out of that logjam.

I have to admit that I’ve been frustrated by the fact that white people at all levels of society have thought of race in terms of what people of color have to do to solve their own problems or what we have to do for them.

Rarely have people asked us to turn the political mirror on ourselves and ask both how we white people have contributed to the problem and what we can do to address it.

Robin DiAngelo’s book is one of many recent attempts to do just that. It comes at an important time when instances of overt and not quite over racism are on the rise. To some degree that reflects the politics of the day. But, as she points out, it also reflects the reluctance of white people to take the question(s) of race on seriously because of what she labels white fragility.

DiAngelo has been both a professor and a trainer in these areas, and her frustrations on both fronts clearly come through–as well they should on two key levels.

First, she makes the case that just about all white people hold on to some implicit beliefs that they are and should be in charge. We set the cultural norms about what “making it” means in this society. Without always being consciously aware of it, we tend to assume that those conditions will remain. Thus, like dozens of other commentators, she explores the role of implicit bias, white privilege, and the like in ways that most readers will find familiar.

Second and more importantly, she is frustrated by the fact that white people tend to avoid tough discussions especially about things like white privilege. All too often, whenever she would try to raise such issues in a workshop or a class, her audience would find a way to deflect the conversation. Even when she had been invited in to do diversity training.

In the 1990s, President Clinton urged Americans have to have serious discussions and dialogues about race. Twenty-five years later, DiAngelo and others are helping us do just that.