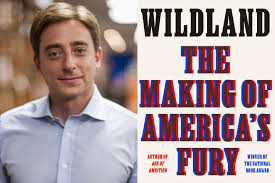 After spending six years as a foreign correspondent in China, Evan Osnos returned to the United States to cover American political life for the New Yorker in 2013 just as our political systems was beginning to unravel. After writing a biography of President Biden, Osnos turned his attention to that unraveling by telling its story through events in three communities–Greenwich CT where he grew up and the first two cities he worked in, Clarksburg VA and Chicago IL.

His basic point is not all that unusual:

America wasn’6 just losing a story of itself; it was losing a habit of mind, a capacity to envisage a common good. Americans did not deny their fears; they announced them and acted on them. (10)

The book’s value lies in its narrative which weaves the very different experiences of the three communities he lived in before he headed off to China.

Greenwich is one of the wealthiest communities in the United States and has long been a bastion of the traditional Republican elite, including the Bush family. Osnos shows how the community has changed, with hedge fund executives taking the town to the right and, in some cases, off the ethical rails. At the same time, the town has diversified socially and ethnically which makes it a microcosm of some of the most dramatic changes sweeping the country, including our growing economic inequality.

Osnos got his first reporting job in Clarksburg which is as different from Greenwich as a small city could be. It epitomizes the rust belt and its decline. Perhaps because it was so different from his home town, Osnos fell in love with the place and has regularly returned there over the years which allowed him to witness its decline and report on how it has contributed to our becoming, in his terms, a wildland.

Osnos then got a job at the Chicago Tribune which initially sent him to China before he joined the New Yorker. Chicago presents us with a very different story of our “wilding,” which Osnos tells largely through the lens of families who struggle with the continued impact of systemic racism on all aspects of urban life.

This is not a fun book. Its title takes off from the wildfires which also began sweeping this country at about the same time he returned from China. It’s not just wildfires. Instead, Osnos is convinced that we’ve become a wild land which is definitely not fun to read about.

However, it is also an important book because it provides a grass roots view of our ongoing unraveling which also means that it may be the best book to read about our current crisis if you only have time to read one of them.