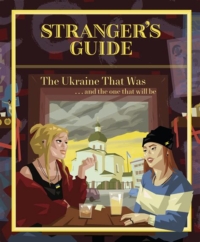 My job as Senior Fellow for Innovation at the Alliance for Peacebuilding is a delight in part because I made it up myself and it doesn’t have a job description. If it did, it would run something like “the Fellow scours work in related fields that peacebuilders could and should adopt and adapt for their own use.”

Of all the things I’ve done in the fifteen years I’ve had this title, nothing has been easier—or more rewarding—than working with Stranger’s Guide for whom we held a launch part for its issue on Ukraine earlier this week.

Let me do the easy and less interesting part first. I didn’t have to look hard to find them. I have known the family of one its founders, Abby Rapoport, since her father and I were freshmen at Oberlin in 1965. In fact, I first learned about the magazine when Ron showed it to anyone who showed even the slightest bit of interest at our fiftieth class reunion in 2019. I was blown away by the writing and by the stunning photography. Given my job and given the Rapoport family’s longstanding interest in peacebuilding, Ron thought Abby might benefit from a conversation with me. What started as a one-off Zoom session has turned into weekly meetings at which we explore how our two communities could work together.

And, as you’ll see below, it has been rewarding. Although he didn’t know it, when Ron showed me the magazine, I was finishing a book in which I talked about the importance of what I have come to call the peacebuilding pivot, the need for which has only grown since then.

Put simply, given the intersectional issues that burst to the surface in 2020 and more, the time has come for professional peacebuilders to pivot and, at times, build coalitions with others working for social change in which a) their issues are prioritized and b) we bring our conflict resolution and other skills to the forefront.

So, when Abby and her co-founder Kira Brunner-Don decided to do an issue on Ukraine, I realized that it was time to see how our two communities could work together.

That led to the launch party, which we assume will be the first of many joint endeavors. As you can see by watching the recording below which does not include the breakout sessions, we focused on what our two communities could do together about Ukraine and other conflicts that they and we are both interested in.

Early in the session, I mentioned that Stranger’s Guide would be the perfect gift for procrastinating peacebuilders to give their friends and family during this holiday season.

At first glance, Stranger’s Guide might seem like a travel magazine, and, in some ways, it is. Each of its four nearly book-length issues a year covers a place that many people do visit, including some that might be on your bucket list—New Orleans, the Caribbean, Scandinavia. Many are lesser known destinations—Tehran, Lagos, Texas—that more people should go to in order to learn about the current world’s troubled social dynamics.

But, as you dig into any issue, you quickly realize that it is anything but a stereotypical travel magazine. Sure, it has eye-popping photography and stories about remarkable places. However, Stranger’s Guide is much more.

To begin with, almost all of the contributions come from local authors and  photographers who give readers a feel for what life is like in their corner of the world. Even more importantly, they cover parts of life that traditional travel magazines leave out and “normal travelers” (whatever that means) never get to see. Most of the contributors are young. There is always something about the local arts and pop culture scene. At least one article deals with the LGBTQ+ community. Another covers sports—often in an upbeat way.

The magazine only comes out four times a year so that readers can take the time to think about the material in each issue. In my own case, I often find myself pursing topics Stranger’s Guide raises in more depth which is harder to do with the weeklies and monthlies that arrive at our house for which I often find myself rushing to finish one issue before the next one arrives.

In short, it’s a magazine that makes you think. Ands helps you go down intellectual rabbit holes of your own choosing.

When Russia invaded Ukraine year, the team put its plans for this year’s final issue on hold and decided to devote it to Ukraine instead. The decision was easy. Abby and Kira both started their careers as political journalists, and Kira had worked in Ukraine on and off since 2014 and already had lots of contacts among local journalists and artists. 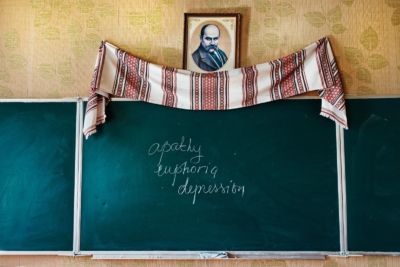 Although they had to put the issue together very quickly, they outdid themselves. If you want to know about what is happening in Ukraine right now, this is not the place to go.

But, if you want to think about some other equally important things—why the war happened, how it disrupted lives, or how it will leave lasting scars—there is no better place to turn. It mostly has “evergreen” content that should interest readers even after the war (eventually) ends. It also covers the war with stunning photos—mostly in black and white—and first hand accounts of what it has meant for everyone from journalists to members of the rave/dance community to prisoners and their children. 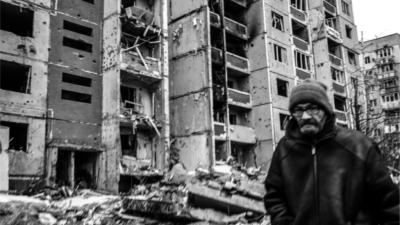 Each of the articles delves into something one rarely finds in the everyday coverage of the war. How it affects journalism. Young adults who used to be part of the club scene. Incarcerated women and their children. The Jewish community. The fight game and how Ukrainian boxers struggled in competition with their Russian counterparts.

You’ll even pick up some delightful–if otherwise useless–factoids, including the fact that Ukrainians never give an even number of flowers or that their country has the world’s largest toilet bowl and painted easter egg museums.

Even though you should subscribe, some of the material is available on line, including an article by Kira which is not in the print edition.

We could not record discussions we facilitated with the attendees, so you will have to take my word for what happened at them. In essence, the discussions reinforced some directions we peacebuilders realized we had to head in and gave us new insights in how we could reorient our work: 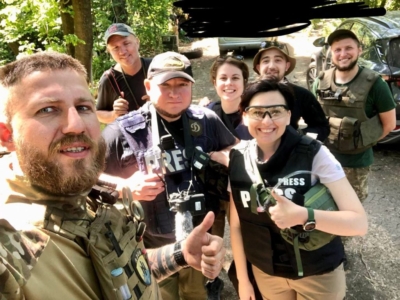 Most of the people who came to the launch had never heard of Stranger’s Guide beforehand. Most were therefore delighted and surprised by what they heard. Most, too, were enthusiastic about finding ways of building on what we accomplished in that hour and a half, including: