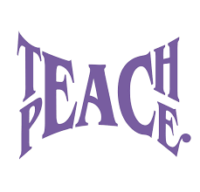 I’ve long been fascinated by design thinking as used by companies like IDEO and Pixar. They are world famous because they combine systems thinking with widespread participatory tools to create new products ranging from the iPhone to the first fully digital movies.

Teaching courses in peace and conflict studies is a different kind of enterprise. Rarely are you teaching new courses from scratch or creating new products that never existed before unless you are also building a new program at the same time.

That does not mean, however, that design principles are irrelevant in teaching these kinds of courses. 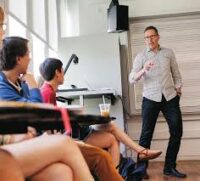 Here is where some ideas I learned from Brian Alegant at my fiftieth Oberlin College class reunion (yes, we have unusual reunions). Brian teaches music theory and won the national professor of the year award in 2015 because of the way he used backward design in his core music theory classes which all Oberlin Conservatory students take as part of four-course sequence.

You would be remiss if you didn’t ask why courses on music theory are important to those of us who teach about conflict and peace.

In fact, your ability to understand how a musical chord is resolved has little or nothing to do how we settle political disputes other than both involve a search for harmony.

However, the idea of backward design as he uses it does make a lot of sense.

Developed by Jay McTighe and the late Grant Wiggins primarily for K-12 teachers, backward design is a creative way of teaching core concepts so that students can apply them in a wide variety of settings once the course is over. 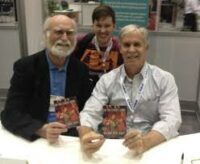 That’s what Brian wants his music theory students to do. More importantly, that’s what I want to do when I teach conflict resolution and peace studies classes, since those students will be dealing with the course material for the rest of their lives, whatever professional path they choose to take.

As is the case with most design thinkers, they are rarely critical of what we are currently doing wrong, preferring to focus on how we could teach or do other things better.

However, they do disabuse us of one habit far too many of us fall into—focusing too much and, especially, too early on the content we want to cover. That’s a bigger problem in some other disciplines than it is in peace and conflict studies or comparative politics which I teach and write about. Even in my case, however, we spend far too much time worrying about the cases we should cover or even the books we should assign before we make the key decision which lies elsewhere.

As the first figure which I’ve adapted from Wiggins and McTighe’s book, the key is to focus on concepts that the student can use in trying to intellectually understand as a student and  practically respond to as an activist. In other words, it’s the generalizable concepts or ideas that have to come first. 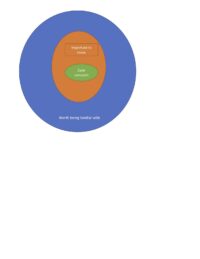 Desired Results. In other words, the last thing you want to do in designing a course is to turn to your text book first. Any good textbook covers more material than you can emphasize in a given semester or term.

Therefore, you have to decide what you want your students to learn first. In a video he made shortly before he died, Wiggins asked a group of student teachers to write a one sentence goal statement for the course they were teaching. As you might be able to see in this first chart if your screen is big enough, McTighe and Wiggins want us to focus in on the core concepts we are most interested in.

In our case, a single sentence and goal might be too simplistic. Instead, you probably will want your students to master a few key concepts because, as Wiggins and McTigue argue, the long term goal of any course in any subject is to give students concepts that they can apply in seettings other than the ones you present in class.

Typically, you would probably settle on dozens of concepts that you will mention in passing because they are worth knowing about and focus on a far smaller number that fit their “core idea” category. For illustrative purposes, I’ll limit myself to one—empathy.

Any course in conflict resolution and peacebuilding is likely to emphasize empathy in at least two overlapping ways. First, it is an analytical tool that one needs to use especially in understanding the behavior of people one disagrees with. In my case, it helps my understanding of contemporary American politics to the degree that I can put myself into the mental “shoes” of a Trump supporter. Second and more importantly, whether I’m an activist or a mediator/third party neutral, I need to be able to understand the people I’m working with in order to either convince them that I’m right or to help themsee creative alternatives to the status quo.

What a Student Needs to Know. The students, first, has to understand what empathy means which can be difficult given how loosely the term gets used in everyday conversation. They also have to understand how  conflict and peacebuilding professionals have brought empathy into their work.

Therefore, I would try to define a variety of learning experiences in which the students encounter ways in which conflict resolution and peacebuilding professionals have used empathy in their work. In addition to the examples in the core textbook, I would show videos, assign other readings, and give the students in class or out of class exercises that help them see empathy in action. 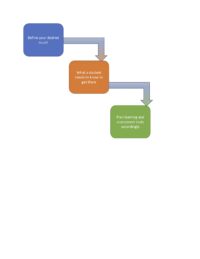 Learning and Assessment Tools. Finally, assessment tools would measure the degree to which they master the concept, especially their ability to use it in other contexts. That certainly can’t be done using the kind of short answer questions used in conventional testing. Even essay exam or paper topic questions have to be specially design to measure the student’s ability to take a concept developed in one classroom context and apply it in another.

Frankly, there is no obvious way to do that. If I were teaching such a class today, I would base a lot of the grade on a project the students designed themselves that applied one or at most a handful of concepts to a case other than one covered in class. Students often dislike group projects because they are poorly supervised and/or connected to course themes. In this case, you can get around that by setting up what business professor Rita McGrath calls checkpoints at which you meet with the groups and give them feedback on the progress they are making. Indeed, the choice of topic and the learning that takes place at each of those checkpoints can be more important for mastering the concept than making a formal presentation or writing the project up can be.

That takes me to an unusual twist that Brian uses in his music theories which you may not be able to implement in your own course. Because music theory is a four-course sequence, Brian often knows his students before the class begins. Also, Oberlin’s Conservatory is small  with only 580 students this year which makes it easy to foster a close working relationship between faculty and students.

As a result, Brian will often tailor his sections of the music theory sequence around the interests of the students who are actually enrolled in his class that semester. That’s fairly easy to do given Oberlin’s size and culture and given the fact that there is a professional consensus on what the core concepts are.

It would be harder to do that at, say, with a large class like the ones I’ve been sitting in on at George Mason University. It’s also hard to have introductory peace and conflict studies course come up with their list of concepts because they typically don’t have the years of experience that Oberlin Conservatory students do as music practitioners.

Still, to the degree that you can, it makes sense to build at least some of the course around student interests. In other words, keep your course syllabus basic and allow the course structure to change as you meet and respond to McGrath’s checkpoints.

I spend a lot of time with young professionals who have finished graduate degrees and are starting careers at organizations like AfP where I spend most of my time.

I am not always happy with what they have learned after spending at least a year in full time graduate study.

They all know a lot about the literature. They have spent some time studying some of the most Important cases in conflict resolution and peacebuilding history.

Far too many of them, however, haven’t developed the transferable, conceptual skills that they will need to use not just in their first jobs but in building a career in a field that will either change dramatically as it grows or remain mired on the fringes of both academic and political life.