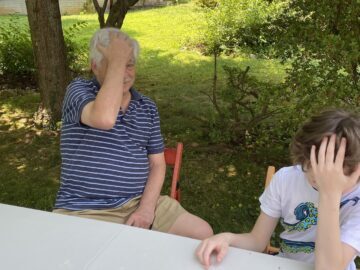 At our socially distanced Fourth of July picnic, my nine year old grandson announced that he was going to show us his “perfect nonverbal way of describing grandpa.”  Then he made a face palm, which he and I did simultaneously a few minutes later as shown in this photograph.

Witty eccentric  grandpa that I am (which prompted the gesture in the first place–keep reading), Kiril was right, It is a pretty good description of my (intended) impact on him and sister.

I smiled because I often use the same gesture while telling Kiril that he  could not have inherited it from me, since we don’t share any genes (he is my step-daughter’s son).

Then, brilliant grandson that he is, he sighed and said, “grandpa, it’s a universal gesture.” So, we pulled out our phones (in his case, his mother’s), and we turned to our good friend Google. Sure enough, he was right. Before I left for the evening, we even found evidence that it’s not just humans. At least a handful (pun definitely intended) of other primates seem to face palm, too.

Curious grandpa that I am, I did some more research after we got home. Eventually, I realized that are at least three ways of thinking about face palms that reflect the reasons why peacebuilding and related work has only enjoyed limited success. They also helped me see some of the tools we should not use in planning our recovery from the current crises in the months and years to come.

The Three Faces of of Facepalms

I’m still no expert on facepalms.

After all, I didn’t even know there was such a term until that picnic, although I’d been palming my face (and forehead) for years

Bottom line–take what I say here with more than your usual grain(s) of salt.

This is the kind of facepalm Kiril had in mind.

Of course, there’s a history.

We cook dinner for our grandchildren (and their parents) two nights a week. We used to routinely cook fish until Kiril’s sister Mila, refused to eat any kind of fish about the time she was four—especially tuna. So, I started weaving stories about how wonderful tunafish were, how they went to (flooded) school at night, and more. Then, when I went to Oman for a conference on reconciliation, I added camels to the narrative.

This has gone on for at least two years. On and off. At home. When we walk to school (the tuna live in the drains next to their school and attend it at night after the staff floods the classroom). Kiril has even been known to mention my penchant for tuna fish and camels on the Zoom calls we regularly have his quarantined classmates (indeed, I am an eccentric grandpa).

More often not these days, whenever I mentioned tuna fish and camels, I trigger a “not again” face palm from Kiril.

Those gestures have a purpose. They are telling me that maybe the tuna fish and camel story has gone on for too long. But, as Kiril’s gesture reminds me, I’m stuck in a habit.

All too often, we have more important “not again” facepalm moments when things seem to go bad. In my case, when Donald Trump does yet another awful thing. My conservative friends had the same reaction when President Obama was in the White House.

The anger and frustration those facepalms reveal are important.

But they don’t point us toward solutions. 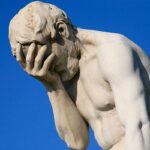 The same holds for the second kind of facepalms.

It’s also at the heart of the Wikipedia entry on facepalms. Yes, there really is one.

It includes this picture of Henri Vidal’s 1896 sculpture, Cain, which supposedly depicts his horror and shame and other emotions after he killed his biblical brother.

Kiril is only nine, so he doesn’t get to mortification or shame very often.

But, I do. I find myself facepalming a lot when President Trump does something that I find embarrassing or worse. It isn’t that he does things I find objectionable. But, he keeps doing them again and again and again—sort of like me with the tuna fish and the camels but with far greater consequences.

I also find myself facepalming when I fail to break a destructive habit—of which I have too many to detail here.

The fact is, we all have more of these moments than we would like to acknowledge.

And, as the likes of Brené Brown  point out so powerfully, they can be paralyzing—or worse.

Shame, mortification, and related emotions all tend to lead the facepalmer to blame him/herself.

In Cain’s case, that was appropriate.

But as Brown and so many others have pointed out, when victims or the innocent convince themselves that they are the problem, it’s hard to move forward.

The third type is my favorite kind of facepalm.

It’s also the one that can lead us toward nailing the stories of social change that roll around in our heads but tend to be blocked by the first two facepalm moments–at least under the right circumstances.

I probably first encountered it when watching this iconic V8 Juice commercial which my step daughter had Kiril and me watch at that cookout.

This pattern is easy to see. All of a sudden, you see something that you should have been easy to see before but was not.

As Christian Busch, author of The Serendipity Mindset, puts it, you’ve (finally) found a way to “connect the dots.”

In my case, the “duh” version of a facepalm moment usually has one or both of these characteristics: 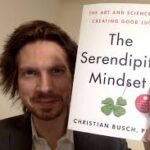 From Facepalms to Serendipity to Action

But, as Busch also points out, seeing things through a new “set of eyes” is not enough to spur you into action. Unlike the first two kinds of facepalms, does open the door to creative activity. However, it doesn’t happen automatically.

And that gets us to why I bothered with facepalms in the first place.

I’ve had plenty of facepalm moments—of all three types.

I needed them all.

However, only some of the “duh” types led me to take constructive action, and then only if two conditions were met, both of which Busch talks about, albeit in different terms: 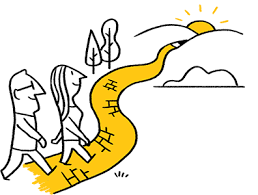 Not surprisingly, when Busch charts that kind of a path, he always uses an amazingly complicated squiggly line, because there is no simple or straightforward way of breaking out of a lifetime of facepalm moments. Here is the one that I used as the featured image for last week’s post.

Trust me, Busch’s is a lot more irregular.

Trust me. I didn’t have a chance of reproducing it on my own computer with my dreadful artistic skills.

When I sat down to do the research that led to this blog post, I had my next book in mind. It will deal we how could and should and did recover from the crises besetting the world today. Early in the week, I though the book should be entitled Facepalm Moments. I’ve decided to stick with last week’s favorite at least for now—Nailing It. The first chapter will, however, almost certainly be about the ways that facepalm moments led me to new insights and new ways of engaging with the American public.