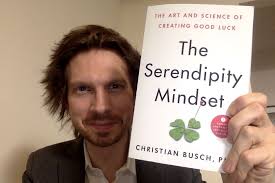 I’ve thrived on serendipity for as long as I can remember. For whatever reason, I’m pretty good at seeing connections among seemingly unconnected things in ways that lead me (and sometimes others) to innovative initiatives.

So, I was delighted to stumble onto Christian Busch’s new book, The Serendipity Mindset, which argues that you can train yourself to do what I though I had been doing more or less accidentally. In fact, it turns out that i had already followed a lot of his advice without knowing it. Speaking of serendipity…

On p, 4, he defines a serendipity mindset as:

both a philosophy of life that many of the world’s most succesfful and joyful people have turned to in order to create meaningful lives and a capability that each of us can develop.

Furthermore, serendipity rarely results from a single “eureka” style moment. It usually comes after a long period of contemplation and even frustration during which you develop the capacity to come up with a new picture and then have the tenacity to bring your new ideas into reality. Meaningful, serendipitous outcomes rarely emerge quickly or spontaneously, and they are more likely to be

born when we are forced to abandon the physical and mental tools that we are familiar with and find new ways to work or think (49).

Busch draws on Carol Dweck and other scholars who developed the notion of a mindset or personal paradigm. In this case, what she calls a growth mindset leaves us more open to expect the unexpected as Busch puts it.

This is not just an academic exercise. It is filled with serendipitous stories, including a TED festival put together over a weekend when a bunch of people were stranded in London because of a volcanic eruption and some other equally bizarre ones from Busch’s own serendipity-filled life.

Oh, if you don’t know the fascinating story of where the word serendipity comes from, you’ll have read the book.