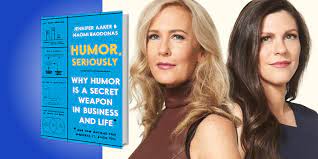 Jennifer Aaker and Naomi Bagdonas teach a course on humor at the Stanford Business School.

It is, as their title suggests, a serious book about funny stuff. Although they wrote it for a corporate audience, it applies to peacebuilding as well.

There are times when humor is inappropriate in either setting, especially when the laughs come at the expense of someone else and/or someone you strongly disagree with–a point they make time and time again.

But there are times when humor helps as when it leads to empathy or breaks down those barriers. Sometimes as with the improv question of “Yes, and?” it can actually help people become more creative.

As they say on p. 3 7 and elsewhere,  humor itself may not be as important as the creation of a sense of levity.

I frankly haven’t laughed so much and learned so much from a single source in years.

Just think about the ASEAN conference at which Madeleine Albright and Yevgeni Primakov performed a skit that was a rewrite of West Side Story in which a love besotten Primakov sings, “I’ve Just Met a Girl Named Madeleine Albright.”