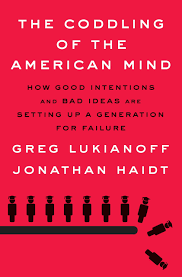 The Coddling of the American Mind

The same political polarization that grips the nation has hit American college campuses, including most of the elite schools that produce a disproportionate share of our country’s leaders. In this provocative new book, Greg Lukianoff and Jonathan Haidt explore some of its contours, causes, and consequences. It is provocative precisely because it goes way beyond university life to address broader issues involving everything from the way we raise our children to broader polarization that has only gotten more intense than it was when they finished the book. I do not agree with everything they say, but the book is a must-read for anyone interested in the fate of American higher education and society, both of which have been at the heart of my life since I was a student in the differently polarized 1960s and 1970s.

The authors first published an article of the same name in The Atlantic two years ago which got plenty of acclaim and plenty of criticism. In the book, they expand on three key themes they saw in the controversies on elite campuses and explore why they might exist. Both sides of the book are controversial and both are worth thinking about, especially for those of us on the left.

Their overriding concern grows out of efforts to either ban or disrupt speakers who supported conservative, racist, sexist, and other beliefs that went against the left of center norms on those campuses. Even more worrisome to Lukianoff and Haidt was their observation that many students and their faculty supporters saw those speakers as dangers who threatened the safety of many vulnerable students. This came at a time when students and faculty alike began worrying about microaggressions and wanting to create safe spaces to protect them. They make other important points, but I’d like to focus on this one, because it is most central to my own work and to what I’ve seen on campuses, including Oberlin where I went and still visit regularly. Truth in advertising, I’m also drawn to this because I helped lead efforts to keep military recruiters off the Oberlin campus in the 1960s.

On that level, I actually tend to agree with Lukianoff and Haidt. Their goal is to expose students to as diverse a range of ideas as possible. In my day, we might well have been willing to have recruiters visit campus if the military also sent representatives to campus to have an open debate with us. That was not an option at the time. Certainly, banning speakers from campus or shouting them down is not something I appreciate. I might not go as far as they or Zachary West does in actually inviting right wingers to campus. However, they should be seen as an opportunity for dialogue, not as a danger.

Similarly, perhaps because I am older, I’m less worried about microaggressions and the like than many students seem to be. In other words, I tend to agree with the authors that college campuses should be a place where we foster the intellectual and emotional strength of young people rather than obsess about their fragility. There are speakers I would not be comfortable bringing to campus, including the firebrands they discuss. However, among the things I most treasure from my days studying and teaching at elite schools are the intense discussions we had precisely because we disagreed with each other and/or with speakers who came to campus.

I’m less happy with the way Lukianoff and Haidt place these controversies in a broader societal context. They put a lot of responsibility on things like the way children of what they call the iGen world were raised. Ditto on the impact of social media. I don’t think they’re wrong. I’m  concerned only that they may have put too much emphasis on them.

I certainly do agree that college faculty, administer, and even us aging alums have to do our part to promote both a culture of intellectual openness and personal safety on campus. My beloved Oberlin has come in for its share of criticism in the last few years for the ways in which it has handled some controversial issues. Some of it is deserved. But, from what I’ve seen, on balance, the current President Carmen Ambar, her predecessor Marvin Krislov, and my student and faculty friends have done a pretty good job of doing both.

Those criticisms aside, this is a book that everyone interested in either the state of American democracy or the state of our higher education should read. As soon as possible.