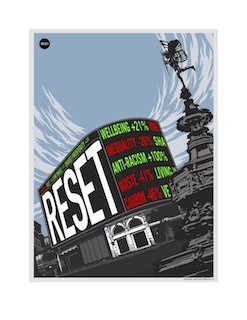 Since most people who read my blog think of themselves as peacebuilders, you might be wondering why I decided to write about Imperative 21 rather than Peace Action Week. Of course, I would love it if you did do your part on that front, too. But here, I want to help peacebuilders see why it might be as important for us to engage with Imperative 21 and its  three pronged reset of the American and global economies.  That’s what I was getting at in my post about a peacebuilding pivot last week. 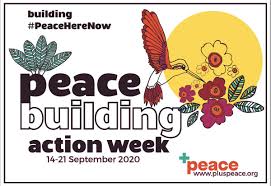 Imperative 21 itself reflects the work of some 70,000 businesses that employ 20 million people, bring in close to $7 trillion, and have more than twice that amount in assets under management. So, this is not a fringe group crying out in the wilderness. Instead, it is a group of successful corporate leaders who want to bring their colleagues along with them in a reset that responds not simply to the half century or more of capitalism’s systematic shortcomings but to the immediate crises that have hit us this year while the team was preparing to launch this campaign.

The group came together before the pandemic and everything else hit us in March. At that point, some friends told me about the initiative, and I’ve been sitting in on some of its planning meetings for the last few months and have watched them grapple with the task of developing some long-term priorities that make sense for a world that is changing before our very eyes. 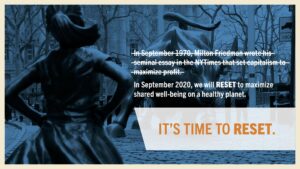 Imperative 21 is publicly launching its campaign on September 13. Its leaders didn’t pick that day to compete with Peace Action Week. Instead, they chose it because it marks the fiftieth anniversary of Milton Friedman’s (in)famous New York Times Magazine article that defined shareholder value as a company’s only legitimate purpose. As recent books by journalists like James Tankersley and academics like Jason Hacker and Paul Pierson have pointed out, that article helped set in most a whole host of unfortunate economic trends, including the growing gap between the rich and poor and our failure to address climate change.

So, the coalition of organizations that makes up Imperative 21 decided to use the anniversary to launch what they are calling an economic reset with a campaign to begin getting ideas about stakeholder capitalism onto our agendas.

You can get a first feel for what Imperative 21 is about by watching this wonderful video it is using to launch the campaign that revolves around three main goals or, literally, imperatives. The reset itself involves three kinds of imperatives which I’ll describe briefly here and delve into in more detail in a series of blog posts over the next three weeks.

Design for the Future 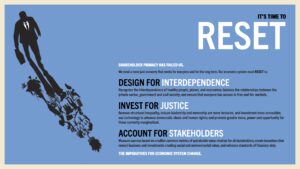 The word design has become a buzzword in the corporate world. However, unlike many of the so-called unicorns, Imperative 21 has always seen the need for economic and other forms of design that creates a better world for the foreseeable future—if not beyond. From the beginning, Imperative 21 advocated creating an economy that takes the interdependence of the planet for granted—an interdependence that takes us beyond climate change to include all of the issues in the UN Sustainable Development Goals, which are also at the heart of global peacebuilding efforts. Given the events of the last six months, its founders have had to added public health, social justice, and  inequality as key features of this first imperative. Because they are focused on influencing the business community, they stress the importance of free and fair markets, but they understand private enterprise has to be anchored in partnerships with government, civil society, and more.

This second imperative probably forced its founders to rethink their priorities the most—just as it has for peacebuilders. That said, perhaps because they have built businesses, they see the importance of investing now so that you can reach larger goals later on more clearly that we peacebuilders do. Nonetheless, the unequal impact of the virus and the protests since George Floyd’s murder have shown us all that we need to redesign an economic system so that it can remove structural racism and other forms of inequality. Like many in American society as a whole, these business leaders have a renewed sense that we have to get beyond performative statements and find ways in which corporate leadership and ownership truly become more inclusive, and investment funds made more available for underprivileged populations, especially those that serve communities of color. Since many of its founders built their businesses either in or by using new technologies, they stress the importance of using IT platforms to advance democratic ideals and human rights by enabling the voice, power and opportunity of those who are currently marginalized.

The one conclusion Friedman reached in his 1970 article that has had the most devastating consequences was his singular focus on shareholder value. Instead, as their own companies have demonstrated, Imperative 21’s leaders stress the fact that we all need to transition into an overall economic system that measures success based on credible common metrics of sustainable development that creates value for all stakeholders. The words shareholder and stakeholder share nine of their eleven letters, but are really linguistically worlds apart. Shareholders only includes a company’s owners. Stakeholders includes everyone—owners, employees, customers, people in the supply change, the entire planet (especially when climate change is involved) and future generations. Without getting too wonky, some laws will have to change about what is referred to as a company’s fiduciary duty. Still, Imperative 21’s founding business leaders have shown that they can simultaneous turn a profit and create social and economic value.

The Imperatives team decided to publicly launch its efforts on the fiftieth anniversary of the date Friedman published his article. There will be ads in the Times and other major newspapers that day. That Monday, a version of the image will flash on NADAQ building. Later in the week, other images will appear on exterior walls and corporate  headquarters around the world.

But then the hard work will begin.

If you take Friedman’s article as the starting point (I would start the timeline a lot earlier), it took us fifty years to create the mess we are in now. Though we should be able to speed things up, it will take us at least as long with lots of experimentation and learning and some good luck before we come close to getting it right.

That’s something we peacebuilders understand.

Where We Fit In

Imperative 21 primarily targets c suite executives like themselves, few of whom read my blog. However, the campaign this week and everything that follows on its heels will have two other key audiences, both of which potentially includes the peacebuilding and conflict resolution community.

First will be advocates for the policy changes implicit in the three imperatives both in our own communities and at the national level. Second and even more importantly for our purposes here are potential allies who join a coalition in support of the three main imperatives and their implications.

When I wrote about directly engaging in movements for social change that place us on the right side of history in my blog post last week, I had initiatives like Imperative 21 in mind. Of course, we have to continue doing our own work, which is why I’ll also be doing my part in Peace Action Week.

But, if I’m right, we might actually make more progress toward oeacebuilding in the long run if we combine forces with initiatives like Imperative 21 now. In the time I’ve spent with its team since June, I’ve already seen that our perspectives both on the systemic failures we face and on the steps we need to head in are one and the same. I’ve also seen that we add value to their work because we can help them deal with the conflicts that their work will engender and because our own work leads us to explore structural causes, personal paradigms, and the like even more deeply than business leaders traditionally do.

If I’m right again, working with organizations like Imperative 21 will make it easier for us both to reach the kind of paradigm shift I’ve been ranting about for the last fifty years.