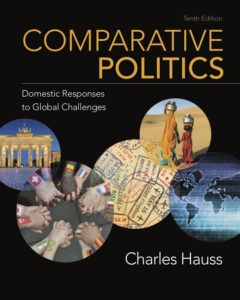 This week, the first students will begin using the tenth edition of Comparative Politics: Domestic Responses to Global Challenges while I put the finishing touches on my web site and begin writing a comparable text for my other field which is tentatively titled, From Conflict Resolution to Peacebuilding. Not surprisingly, I have been thinking a lot about how the two fields overlap, but mostly about the ways in which they have little in common.

Until recently, I’ve worried more about the gaps in what my colleagues in peace studies know about current trends in political science. Here, however, I want to focus on the implications of the one thing we peacebuilders focus on that comparativists often ignore—the role of systems.

Ironically, comparative politics researchers got there first, which I learned in my first course in 1966. For someone coming from math, physics, and engineering, the writing of David Easton and Karl Deutsch grabbed my attention and kept it to the point that I have based my textbook on systems approaches from the beginning.

For good or ill, systems theory fell out of favor in political science at a time when it was becoming more important and more useful in dozens of other disciplines, including peace and conflict studies, although I have to say that colleagues in the hard sciences and management have made a lot more progress. In particularly, the more consistent use of systems-like approaches could help comparative politics in at least the following ways as I have seen both in my own classrooms and in reactions to my book.

Systems analysis is no panacea. It is a hard tool to use in doing actual research because the methodological tools it depends on require a lot more mathematical and computing skills than most social scientists have.

Nonetheless, I am convinced that systems approaches are helpful enough that I will be spinning these and other points out into a short primer on comparative politics before the end of January, which will appear on that part of my web site.