I recently read AJ Jacobs’ It’s All Relative and reviewed it on my web site. It made me think a lot (as well as laugh a lot), so I thought I would spend this week’s blog post reflecting on what I take to be his implications for the work I do as a peacebuilder and a student of comparative politics.

The book traces the way Jacobs used his global family reunion and its meme, “I am a cousin,” to help people see that we are all connected and, indeed, (distantly) related.

Jacobs is a writer, not an activist. So, it is hardly surprising that he didn’t take some of the implications of “we are family” in the same directions I would. I think there are at least four of them that we should pay attention to whether “we” are peacebuilders or students of comparative politics 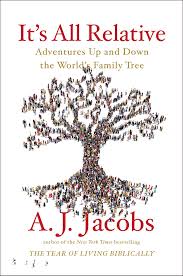