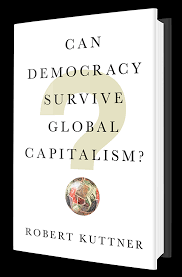 Bob Kuttner has been on my radar screen since I was a college student when my professors held him up as a poster child for what Oberlin grads could do as scholar-activists. I then followed his work over the years, and when we finally met a few years ago and kept showing up at conferences where he was developing the ideas that became Can Democracy Survive Global Capitalism, I really learned that my professors were right. 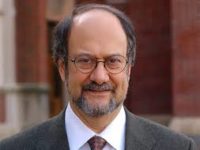 This is an amazing book that chronicles how and why capitalism has “been turned viciouusly against ordinary working people” over the last forty years. This is not new ground, but Kuttner covers it in new and exciting ways both by exploring times when capitalism worked more effectively for everyone and by putting events in the United States in comparative perspective.

Yes, this is a book about how the victory of financial capital and its acceptance by the center left has led to what he calls the “dueling injuries of class, race, gender, and culture (8). But, it is his historical and comparative perspectives that make the book truly compelling.

History. Kuttner tells us that it has not always been this way. In particular, when we were growing up in the 1950s and 1960s, leaders in the United States and Western Europe took advantage of an extended period of unprecedented growth and a sense of solidarity that emerged from the Great Depression and World War II to expand the role of the state both in steering the overall economy and extending benefits to the working class. For good or (definitely in Kuttner’s case) ill, that consensus began to erode with the downturn of the 1970s and has continued ever since. Critical here is the left’s acceptance of global financial norms especially under Bill Clinton, Tony Blair, Gerhard Schroeder, and their successors.

Comparative Perspectives. As a comparativist, I was particularly taken by his use of evidence from Western Europe. Far more than here, the post-war bargain favored workers and produced institutions that allowed labor and capital to steer the overall economy. There, too, however, the left has ceded the policy making initiative to conservatives who insist on orthodox models, especially those involving austerity emanating from the German government and the leadership of the European Union.

That, in turn, leads him to a compelling argument about today’s political crises on both sides of the Atlantic. In essence, Kuttner is arguing that the political dynamics of the last forty years have reinforced capitalism’s tendency to centralize both wealth and power. Under the circumstances, disgruntled members of the working class and others who have seen their incomes stagnate for more than a generation have a choice to make—between an intellectually sterile left and a nationalistic right. Not surprisingly, a large number of those voters have chosen nationalist populists.

In that sense, Trump, Brexit, and the rise of politicians like Victor Orban in Hungary should not surprise us. Here, too, Kuttner is not breaking new ground.

Where his book stands out is in proposing a series of credible policy options the next generation of left of center governments could and should enact. While the book goes into these in detail toward the end, you can get a feel for what he is driving in this list of three of them he presented at a book talk in Washington in April 2018. All could be paid for in the United States by rolling back the tax cuts passed in late 2017.

In sum, this is a book well worth reading even—and perhaps especially—for readers like me who thought they already understood both the historical and comparative evidence.